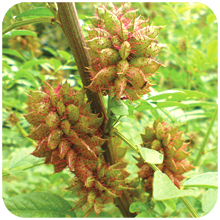 Glycyrrhiza glabra (licorice) is an herbaceous, perennial plant, common in southern Europe and the Orient, whose roots with bittersweet taste are one of the oldest spices. Licorice is a perennial herbaceous plant or shrub with imparipennate leaves and small flowers, lilac and thorny-hairy fruits. It has aspect of subshrub that grows spontaneously as well as cultivated, prefers sandy soils and is less common found in former river valleys and cultivated areas. Inflorescence occurs in June and July.

Chemical composition – The root contains triterpenoid saponins, of which the most important is glycyrrhizin, naturally ocuring or as derived compounds, such as glycyrretic acid. Root contains phytosterols and flavonoids (liquirizine). The sweet taste of the roots is due to the presence of appreciable amounts of glucose, fructose and sucrose.

Recommendation – Gastritis, gastric and duodenal ulcer, inflammation and pain, obesity due to the effect of diminishing excessive appetite, gum inflammation, skin disorders such as psoriasis or eczema. In rheumatoid arthritis. Due to its expectorant action it has applications in case of respiratory infections. It is also efficient in hypomenorrhea, amenorrhea and premature menopause.