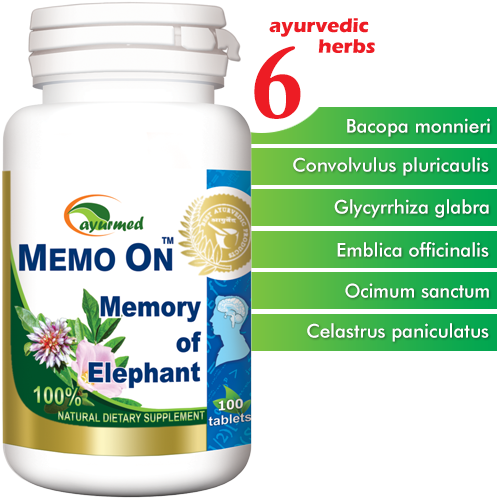 Because of its complexity, the human brain still hides many secrets. Every time when it had thought that nothing new could be discovered, the human brain revealed one of its numerous mysteries. An amazing attribute of the brain is its capacity to retain information, called memory.

When the brain is working normally, human has an enhanced awareness, strength of focus and attention. The natural dietary supplement MEMO ON contains ayurvedic herbs that contribute to the normal functioning of concentration and memory capacity, sustaining intellectual efficiency. Supports integrative brain functions (memory, perception, concentration, systematization) and physical and mental coordination. The rich and varied content of phytonutrients and improved blood circulation in the brain helps maintain mental and intellectual functions and performance. MEMO ON diminishes the effects of mental fatigue, nervous exhaustion, stress, restores confidence and optimism. Supports pupils and students in case of intense mental and intellectual efforts especially during exams. MEMO ON supports elderly people to maintain mental and intellectual capacities and is useful as adjuvant in the therapy of nervous  system.

MEMO ON tablets contributes to:

Suggested dose:  As a dietary supplement, ½ hour before meals or 1 hour after meals.

Attention: Do not exceed the recommended dose. The dietary supplements should not be used as a substitute for a balanced and varied diet. Pregnant or lactating women and individual with a known medical condition should consult their healthcare professional prior to taking this product or any dietary supplement. This product is a 100% natural dietary supplement and does not contain any preservatives or chemical ingredients. This product is not intended to diagnose, treat, cure, or prevent any disease. Keep out of the reach of children. Store in a cool and dry place. Do not use this product if the seal around cap is missing or broken.