What is premature ejaculation?

Premature ejaculation refers to an uncontrolled and rapid ejaculation, meaning that men achieve orgasm rapidly than they would like to have with minimum stimulation. Most men are highly stressed due to this problem and do not know how to combat and overcome this. 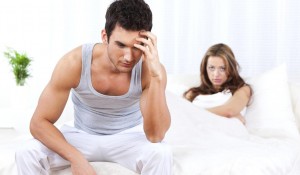 Some men ejaculate before penetration during intercourse and others shortly after this (from 2-3 minutes to 5-6 minutes). The negative effects of premature ejaculation are not hard to be guessed, since this “rapid” loss which can occur several times in a day can result in a lack of zeal for life, decreased libido, impotence and even mental disorders such as depression, memory loss, etc..

One answer to this question is not sufficient. Anxiety, stress, lack of communication with sexual partner, insufficient sexual arousal, anxiety about sexual activity, muscular tension etc. are just a few causes highlighted by the experts and by those affected itself. Also, a number of conditions can cause premature ejaculation: hormonal disturbances, inflammation or infection of the prostate or urethra, neurological disorders (multiple sclerosis, for example.) etc. Other causes of premature ejaculation occurrence may be smoking and drugs that reduce blood flow to the sexual organ.

How premature ejaculation can be prevented/controlled?

Premature ejaculation is considered a psychological dysfunction from the historical point of view. One theory concludes that men are forced by the pressures of society to achieve orgasm in a short period of time due to fear of being exposed, fear that has its inheritance in early sexual experiences they had as teenagers. This habit of getting a quick sexual satisfaction is difficult to change within a long term relationship or marriage. The fact that women need more time to reach orgasm than men, which is increasingly recognized and this may result in the recognition and categorization of premature ejaculation as a problem/disease.

The most important aspect in solving this problem is what generates awareness that premature ejaculation is a particular condition that can be expressed by the phrase: “I feel restless, anxious.” Incidentally, this restlessness and impatience is exactly the opposite of what a woman expects from her partner.

The problem of premature ejaculation can be solved, many times, after multiple consults with psychologist. There are several techniques that can be applied in privacy at home. The most famous is the interruption of sexual intercourse (or stimulation) until you feel that the “threat” of ejaculation has disappeared. You may also try pressing exercises, which, again, are meant to ward off ejaculation moments.

If there exist problems related with lack of self-control during sexual intercourse, a complete cessation of alcohol consumption may be a solution for this, which acts as an aphrodisiac and may dramatically reduce the ability to control ejaculation. Moreover, alcohol drinkers (with rare exceptions due to native background) are those with the greatest problems of sexual dysfunctions.

Another simple and effective way to combat premature ejaculation is use of condom which may reduce sexual stimulation up to 40-50%, being easily controlled by men.

GIVE A REPLY Cancel reply