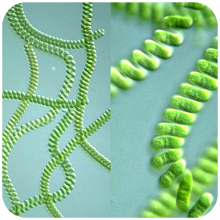 Spirulina is a microscopic filamentous cyanobacterium which takes its name spiral or of its helical filaments nature. It is a multicellular filamentous algae, with many spiral forms. The most sought after is called Spirulina platensis. It used to be a preferred nutrition food of Pharaohs of Ancient Egypt, Mayan and Aztec civilizations.

This plant is incorporated in natural remedy SPIRULINA STAR.