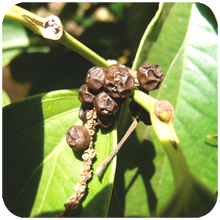 Piper nigrum is a climbing evergreen shrub. The branches are strong, climbing and ramify on the support point. The leaves are broad, pointed at the base, strongly ribbed. The flowers are finger shaped with many small bumps; leaves have variable sizes. The fruits are ovoid or spherical, bright red in color when ripen. The seeds are usually spherical in shape.
It is cultivated in tropical, hot and humid zones. Black pepper is one of the most commercialized spices in the world. The spice is the fruit of the plant Piper nigrum, and is called the grain of pepper. The bouquet is powerful and aromatic, and the taste is very spicy.