WHY IT OCCURS AND HOW TO GET RID OF IT?

If you suffer from frequent headaches more or less intense, it may be the first sign of a migraine headache. Migraine is the most frequent cause of severe headaches. About 20% of women and 6% of men suffer from migraines.

Usually, migraine, which begins in childhood or adolescence, is common in the population segment aged between 25-55 years and after this age period, frequency of migraine significantly decreases. In women, migraine is associated with their fertile period, specifically with the hormonal changes that usually occur in a woman’s body. 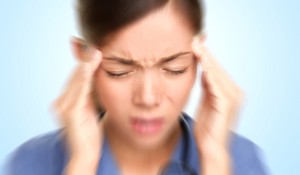 Migraine is a chronic condition characterized by moderate to severe recurrent headaches. Migraine can occur once or twice a year or multiple times in the same month. Typically, migraine is associated with other symptoms such as nausea, vomiting, sensitivity to light or noise, etc.

Fatigue, menstrual periods, certain medications and some foods are just some of the factors that can trigger a migraine. Furthermore, genetic factors may be one of the causes of migraine. Migraine can generally be aggravated by physical activity or may make people to avoid physical activity. Usually, migraine begins with a severe pain on one side of the head, the temples and forehead or eyes. Sometimes, migraine makes us very sensitive to light, sounds or forces us to make least amount of effort even stair climbing. In many people, migraine is associated with nausea, vomiting or vision disturbances. The migraine headache can be so severe that it often prevents us to perform daily activities. In some people, there may be observed mood changes like irritation or depression before having a migraine, where as, some people feel strange odor or taste or feel tired. Muscular tensions also can be a symptom of migraine.

Migraine is a brain condition. It is a condition of certain parts of the brain that deal with pain processing. The exact mechanism is not known, but during a migraine attack, vascular as well as neuronal changes occur.

Migraine is a warning sign that should not be ignored as it may be a risk factor for stroke. There are at least 30 diseases and other 60 “rare” diseases that can cause headache / migraine.

Heat is also a leading cause of severe headaches. The same severe headaches may occur in the rainy season, when the atmospheric pressure decreases and the body feels migraine attacks. The research studies have shown that the strong odors also stimulate the nervous system and thus cause appearance migraines. The same can happen because of the smell of paints, dust and even certain types of flowers.

Long term evolution of migraine in individuals is variable. Most of them have frequent episodes of pain and rare period of pain. However, in the majority of people suffering from migraine, the frequency of migraine attacks becomes increasingly rare (usually after 40-50 years).